Why did Jesus Christ call Himself the Lord of the Sabbath? What else did He say about the Sabbath, and what does it mean for Christians today?

What if someone asked you, “Do you know the Lord?” If you are a Christian, you would likely answer yes.

But what if I changed the question slightly? What if I asked, “Do you know the Lord of the Sabbath?” How would you answer?

If you’re a Christian, your answer should be a resounding yes, because the Lord of the Sabbath is actually a title Jesus Christ gave to Himself in Mark 2:27-28: “And He [Jesus] said to them [the Pharisees], ‘The Sabbath was made for man, and not man for the Sabbath. Therefore the Son of Man is also Lord of the Sabbath.’”

Jesus has many titles that are commonly used, such as “the Christ,” “the Messiah,” “the Savior” and “King of Kings and Lord of Lords.” But why do we almost never hear Him called the Lord of the Sabbath? Does this title imply that Christians should be keeping the Sabbath?

Lord of the Sabbath, the big context: the Pharisees vs. Christ

First, let’s look at the context of Jesus’ statement in Mark 2. Earlier, Jesus had some direct confrontations with the Pharisees (Jewish religious leaders who held strictly to Jewish oral law). Jesus’ relationship with them was, to put it nicely, very tense. He had serious issues with them—and they disdained Him. They looked for any opportunity to discredit Him—especially in public.

They understood that Jesus was claiming to be the prophesied Messiah, and they also knew that there was grassroots support for Jesus among the Judean population. They saw that as a threat to their power and influence.

So they tried to catch Him in some kind of sin to make their case to the people that He was a fraud.

Of course, it was very hard for them to find anything to accuse Him of, because He didn’t sin. But they tried. Sometimes they accused Him of blasphemy (Luke 11:53)—but that accusation didn’t really stick.

So, here in Mark 2, they tried to manufacture another “sin”—breaking the Sabbath.

The immediate context: Jesus, the Pharisees and the Sabbath

Jesus and His disciples were having a leisurely walk on the Sabbath (the seventh day of the week, Saturday). At some point, they walked through some grain fields and were hungry, so they plucked a few heads of grain to eat as a snack. Imagine walking through the woods and picking some wild blackberries to eat as you walked along—
nothing you would consider strenuous or work!

That is when the Pharisees pounced!

They didn’t accuse Him of stealing the grain—they couldn’t because they were well versed in the law and knew Deuteronomy 23:24-25 permitted this.

So, they accused His disciples of breaking the Sabbath by harvesting grain on this day on which people were to refrain from work: “Look, why do they do what is not lawful on the Sabbath?” (Mark 2:24).

They thought they had Him! Jesus was leading a group of Sabbath-breakers and, by extension, was a Sabbath-breaker Himself. They could take this to the people and make their case that He couldn’t possibly be the Messiah. 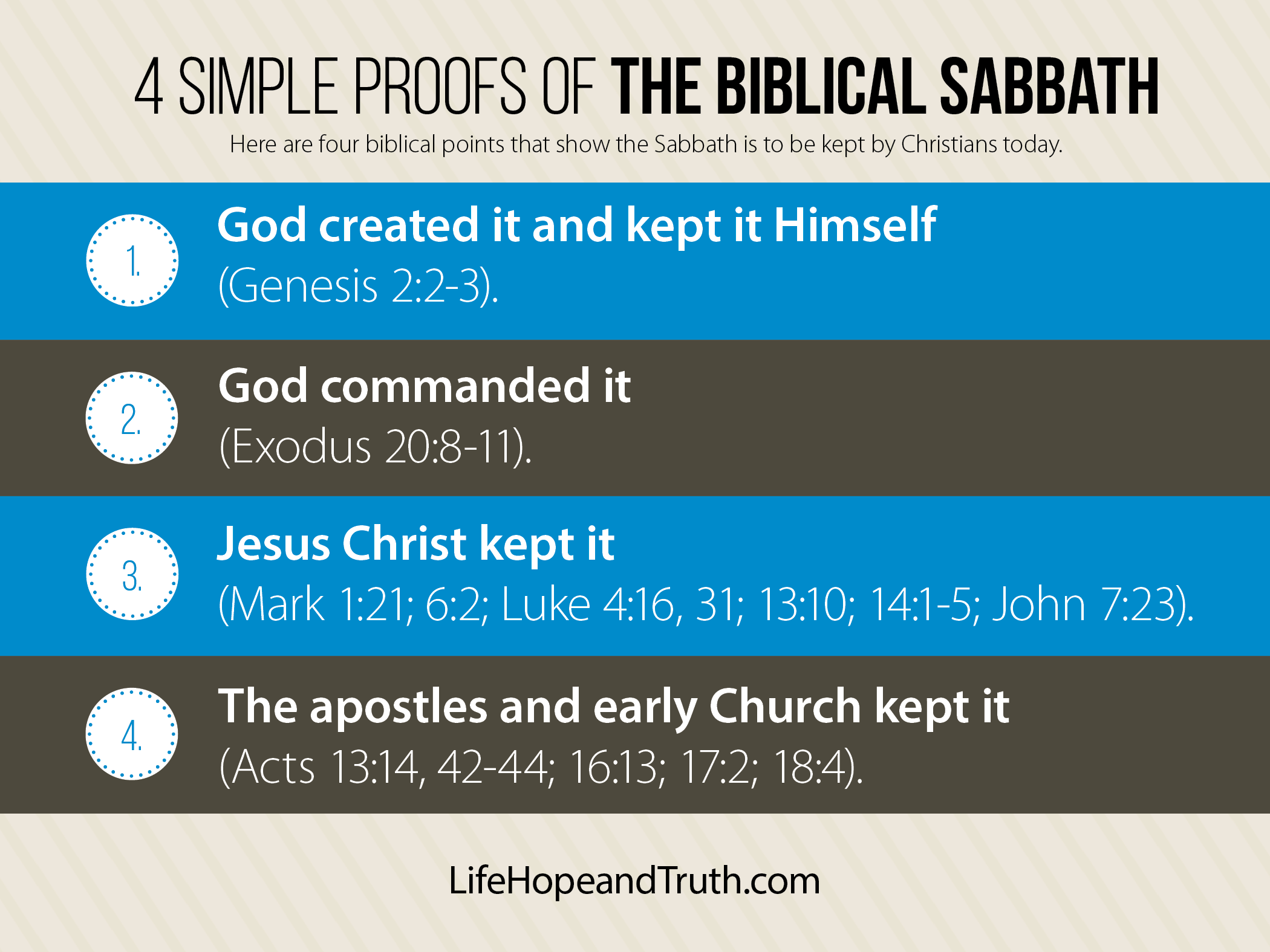 But, as always, Jesus masterfully dismantled their attack. He could have done it by pointing out the ridiculousness of their argument that picking a few heads of grain as a snack qualified as “work.” But He didn’t go there.

Instead, He reminded them that even King David, one of the Jews’ national heroes, was (along with his men) permitted to eat holy bread when he was in need. (You can read about this in 1 Samuel 21.) If David could eat this special bread because of hunger, how could it be a sin for Jesus’ disciples to pluck some heads of grain to satisfy their hunger as they walked along?

But then Jesus made an even more powerful statement about the Sabbath: “The Sabbath was made for man, and not man for the Sabbath. Therefore the Son of Man is also Lord of the Sabbath” (Mark 2:27-28).

Jesus Christ’s words are so crucial because they overturn one of the greatest errors of mainstream Christianity: the teaching that the Fourth Commandment, which commands us to observe the seventh-day Sabbath, was abolished or somehow changed to Sunday. This idea is why most churches hold services on Sunday and do not teach their members to rest on the seventh day (Saturday).

This teaching is diametrically opposite to Jesus Christ’s own words! Jesus did not abolish the Sabbath. He kept and reaffirmed the Fourth Commandment.

If you have always been taught that the Sabbath isn’t necessary, consider the implications of Jesus Christ’s statement:

Implication 1: What the Pharisees didn’t say

The Pharisees were extremely eager to catch Jesus in sin—any sin. If Jesus had been teaching that the Sabbath command was abolished or that the Sabbath had been changed from the seventh day to another day, imagine the accusations they would have been throwing at Him!

The silence of any such accusation reinforces the fact that Jesus Himself was a faithful Sabbath-keeper.

Instead of accusing Him of teaching against the biblical Sabbath, they made picky accusations about Him breaking their misguided, man-made rules about the Sabbath. Their accusations were either about picking individual heads of grain (which broke no biblical law) or about Jesus’ healing on the Sabbath (Matthew 12:9-14; Mark 3:1-6; Luke 14:1-6; John 9:13-16).

Implication 2: Jesus reinforced the Sabbath by healing on it

Yes, the Pharisees had the audacity to attack Jesus as a Sabbath-breaker because He healed people on the Sabbath. Jesus was both sad and angry that their hearts were so hardened to human suffering that they could actually construe freeing a person from suffering to be a sinful violation of the Sabbath (Mark 3:5).

Plus, Jesus emphasized that the Father did the healing (John 14:10). The Pharisees were, in essence, accusing God the Father of sinfully breaking the Sabbath by using His healing power on the Sabbath.

Contrary to the Pharisees’ calloused way of thinking, Jesus made the point that healing actually reinforced the deep meaning of the Sabbath:

“The Lord then answered him and said, ‘Hypocrite! Does not each one of you on the Sabbath loose his ox or donkey from the stall, and lead it away to water it? So ought not this woman, being a daughter of Abraham, whom Satan has bound—think of it—for eighteen years, be loosed from this bond on the Sabbath?” (Luke 13:15-16, emphasis added).

The point Jesus is making is that there is no better day to be given rest and peace from the pain of human suffering than the Sabbath—the day that symbolizes rest and peace! Jesus was reinforcing the importance of the Sabbath by making this connection.

Implication 3: The Sabbath was made for man

If Jesus were planning to abolish the seventh-day Sabbath, He had the perfect opportunity to say so. When the Pharisees accused Him of Sabbath breaking, He could have just said, “It doesn’t matter what I do or don’t do on this day—the
Sabbath is being done away with anyway.”

But He never said that!

In fact, He went on to make a statement that reinforced the universality and timelessness of the Sabbath commandment: “The Sabbath was made for man” (Mark 2:27).

By saying this, He reveals a glimpse into the mind of God.

Genesis 2:2-3 records the origin of the Sabbath. God rested on the seventh day after six days of creation. We read that “God blessed the seventh day and sanctified it [set it apart as holy]” (verse 3).

The tragedy of Christianity’s rejection of the Sabbath is that they reject a positive gift God created to make life better—a gift that not only requires us to physically rest, but also teaches us how to worship and draw closer to the Creator God.

Jesus then summed up the ultimate implication:

Jesus Christ not only created the Sabbath, He continues to be the Lord—or master—of it. He made it holy, determines how and when it is to be observed and declares its purpose. Sadly, years after His ascension to heaven, those who claimed to carry His name gradually abandoned the Sabbath, replacing it with Sunday (the first day of the week). To learn how this change occurred, read “When and How Did the Change in Worship From Saturday to Sunday Occur?”

The result of that unwarranted change is a Christianity that almost universally ignores the genuine Fourth Commandment. The seventh day is not observed as holy; Christians don’t rest on it or treat it as a special gift made for us by God Himself.

But, despite what men have done to the Sabbath, Jesus Christ remains the Lord of the Sabbath. We encourage you to study this topic deeper, because there is much to be gained by keeping the seventh-day Sabbath.

Only by keeping the Sabbath can you really come to know Jesus Christ, the Lord of the Sabbath.

To learn more about the Sabbath and its importance to your life, read our booklet The Sabbath: A Neglected Gift From God.